I guess my plan of posting on here at least once a night isn’t really working out, oh well, I can only try my best. Anyway, hopw you are all ready for another rant! So I hope you’re ready! Tonights topic is motorcyclists! 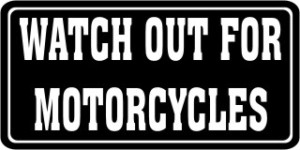 You know, I see these bumperstickers on so many cars out there “Watch out for motorcyclists!” well, I say, motorcyclists need to watch out for themselves! It isn’t like their rediculously loud mufflers aren’t annoying enough, but they drive like complete assholes. Of course I am not talking about all motorcyclists, some of them drive responsibly, in which case they aren’t a problem, what I’m talking about is the guys who swerve in and out of lanes, try doing stupid little tricks on public and busy roads, and speed up like they are in a race, not to mention those idiots who refuse to wear helmets! Can you believe that you can get a ticket for not wearing a seatbelt in a car but you can’t get a ticket for not wearing a helmet on a crotchrocket? That’s a speeding machine with absolutely no protection around it and a gas tank right between your legs. It’s not like these people have no other choice but to ride a motorcycle, they obviously have money if they can afford something like that, they have the choice to either be safe in a car, or be unsafe on a motorcycle, then tempt fate by not driving safely, then when the crash that they cause does occur, they put up those stupid “Watch out for motorcyclists” bumperstickers.

You are on a road, not a racetrack, calm your ass down

They actually have a celebration that supports motorcyclists who don’t wear helmets in Miami, my friends parents went to it, and they got into a deadly accident, the only thing that saved them was the fact that they decided to wear helmets that time. If you are going to drive something that has less protection than the crappiest cars out there, you should drive more safely than you would if you were in a car. When driving back to my school, there was actually a guy driving a motorcycle, swerving from one lane to another, not even passing anyone, just doing it because he could, if that weren’t enough he was even swerving sharply back and forth in one lane, I couldn’t imagine how nervous that would make the guy behind him, if he hit one little bump, he would have completely lost control, crashed, and the guy behind him could have hit him. If THAT wasn’t enough, he did a wheelie, keep in mind this is on an extremely twisted road, with a high speed limit and several people driving around him. And of course if all that wasn’t enough, he put his arms out, letting go of the handlebars so he could do a gay little “I’m the Queen of the world” pose. This isn’t Titanic douchebag, you’re not in an open ocean with nothing around you, you are on a busy enclosed road with speeding piles of metal all around you. It’s important to mention, that this was all done within 5 minutes, which made me shutter at the thought of how he drives throughout the rest of the day. So I say again, motorcyclists, watch out for your own damn selves, we aren’t responsible for what happens if we are driving perfectly fine and you’re driving like an ass.

Maybe this is what they should be driving.

I don’t care if I get hate for this. I stand by what I say, and like I said before, this does not apply to responsible motorcyclists. If you want to defend assholes, that’s your own priority.