If you read my earlier post, you know that I had mixed feelings about this movie. I had seen the first two and liked them, but I thought the third was kind of running the series into the ground.

The basic premise of the movie is the same as the first two. A guy in a family gets a camera and because of this camera, creepy things start to happen in the house. Ok… well maybe not because of the camera, but it kinda seems to be that way with these movies. As far as we know, nothing creepy happens before these cameras are brought into the house. The movie is completely in first person, except for the two cameras he sets up in his room… and daughters room (Kinda creepy) The movie is supposed to portray what happens to the girls that they remember as children. Apparently they don’t remember too much because none of this stuff is ever mentioned in the previous movies. The movie is of course set when they are children, so in 1988, specifically September. The two have really long, really dark hair, making their appearance similar to the girls from The Ring and The Grudge series. The youngest one has an imaginary friend named Tobi who is, according to her, a tall old looking thing. The relationship between the two doesn’t seem like what a normal little girl would have with an imaginary friend, she seems more scared of it than friends with it. Anyway, it lives in a little crawlspace in the girls room. Strange stuff starts happening around the house, lights falling, weird noises, stuff like the previous movies and then it starts to escalate. Before you know it, friends are getting scared away (In this case, babysitters) and the family is running scared. If you wanted a new storyline, well, it’s not going to happen. Just a different set of characters and more clearing up of the main plot. There’s a huge twist at the end. If you don’t want a spoiler don’t read the following paragraph, the one after that has the final review. 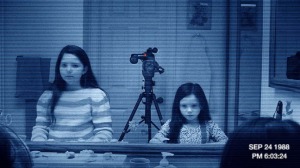 The huge twist is that the grandma is apparently causing all this. The family goes to the grandmas house to escape the thing, only to find out that not only has the thing followed them, but the grandma is some sort of witch who is preforming some sort of ritual with other old ladies. The grandma and her posse of old ladies goes after the boyfriend, kills him and the mom, and takes the two girls, the older of the two is somehow possessed (That was a creepy scene by the way). The thing that bothers me about this is in the second one they revealed that the family some how made a deal with the devil and promised it their first born boy, which really pointed out the fact that it made no sense that this Tobi was going after the girls. According to the second one, a boy hadn’t been born in the family for generations and the mother didn’t seem to have a problem. By the way, the boyfriend getting killed was a really brutal scene.

So for the final rating… I don’t know, I’m still mixed on this. It was scary, don’t get me wrong, but it wasn’t scary in the same way that the first two were. The first two were all about scaring you by strange things happening and you not being able to see the source, and the all over atmosphere just being really creepy, you would have to look really carefully to see the little scary details. This one had more jump out scares, you got to see more of the actual entity, even though for the most part it was a weird shadow. There was an actual scene where the babysitter just sort of jumped out and said “boo!” there was a lot of stuff like that which kind of turned me off to it. I didn’t really like that. Also, if you are expecting scenes from the commercials, like the creepy scene of her jumping from the balcony, well, those are all teasers and don’t actually happen. If you want a jumpy scare, you’ll get it with this. If you want an actual story (But let’s be honest, who want’s that in a horror movie) then look elsewhere. I would actually either see this several weeks after it comes out in theaters, or watch it at home with your volume way up. The reason why I say wait to see this later after the release, is because… well, people are assholes and talk during movies…